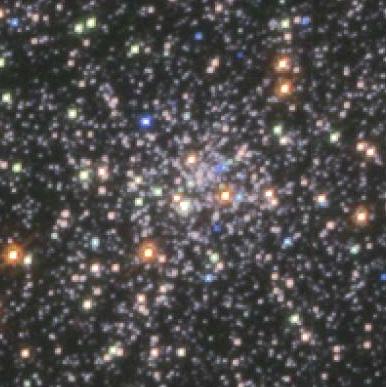 Explanation: Densely packed stars in the core of the globular cluster M15 are shown in this Hubble Space Telescope (HST) image. The star colors roughly indicate their temperatures - hot stars appear blue, cooler stars look reddish-orange. The region visible here is only about 1.6 light-years across, compared to the 4.3 light-year distance to our own Sun's nearest neighbor. Imagine the night sky viewed from a planet orbiting a star near this cluster's center! M15 has long been recognized as one of the densest clusters of stars in our galaxy outside of the galactic center itself. Even the unprecedented resolving power of the HST cameras could not separate the individual stars in its innermost regions. However, this HST image reveals that the density of stars continues to rise toward the cluster's core, suggesting that a sudden, runaway collapse due to the gravitational attraction of many closely packed stars or a single central massive object, perhaps a black hole, could account for the core's extreme density.