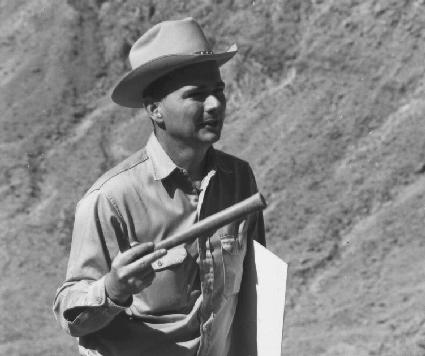 Explanation: Eugene Shoemaker's passion was Astrogeology. He dreamed of going to the Moon. Credited with inventing the branch of Astrogeology within the U.S. Geological Survey, his contributions to the field and the study of impact craters, lunar science, asteroids, and comets are legendary. Though his own career as an astronaut/geologist was sidelined by a health problem, he helped train the Apollo astronauts in geology and the investigation of the lunar surface. Seen here at Meteor Crater, Arizona in the mid 1960s, Shoemaker was killed in a tragic car accident in July 1997. He is survived by his wife and professional colleague, Carolyn, and children. In a fitting tribute conceived by a former student, Eugene Shoemaker's ashes were placed on-board the Lunar Prospector spacecraft which has now successfully reached a polar mapping orbit around the Moon. After completing its scientific mission, the spacecraft will ultimately impact the lunar surface.