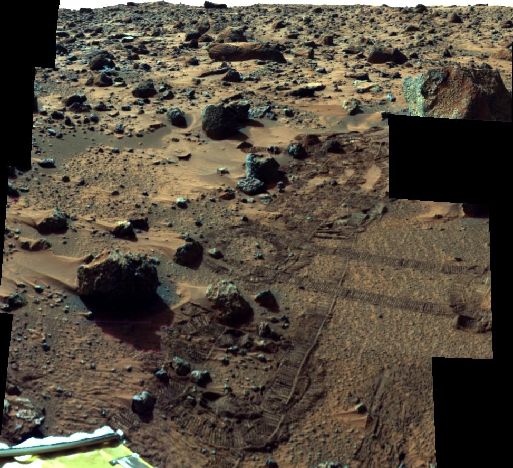 Explanation: Spectacular details of rover tracks, wind-driven soil, and textured rocks on the Martian surface fill this color mosaic. The view is north-northeast from the Sagan Memorial Station at the Pathfinder landing site on Mars. These images are just part of the "Super Panorama" - a detailed color and stereo imaging data set being compiled by Pathfinder's IMP camera. The data set will be used to derive detailed topographic maps of the landing site and to further explore the mineralogy of the martian rocks and soil. The forward rover deployment ramp and the rock named Barnacle Bill, appear in the foreground at the left while the larger Yogi rock is partly visible at the upper right. Criss-crossing tracks were made by the cruising Sojourner robot rover's spiked wheels. With three wheels on each side, the two foot long rover makes tracks about 1.5 feet apart.