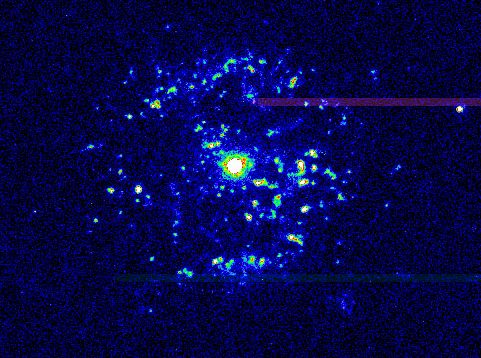 Explanation: What happens when a thermonuclear blast occurs on the surface of a white dwarf star? Over the years astronomers have watched (at a safe distance ...) as, 6,000 light years from Earth in the southern constellation Pyxis, a binary star known as T Pyxidis repeatedly produces these fearsome explosions. This Hubble Space Telescope image of nova T Pyx captures what appear to be blobs rather than the expected shells of material expanding from this interacting star system. Like other binary star systems which produce nova outbursts, T Pyx is composed of a dense white dwarf and a close companion star. An outburst occurs when the temperature and density of the sea of matter dumped from the companion onto the surface of the white dwarf reach the nuclear flash point for hydrogen. While material is violently blown off, the white dwarf itself is not disrupted and soon begins to accumulate more matter from its companion, repeating the cataclysm a few years later.