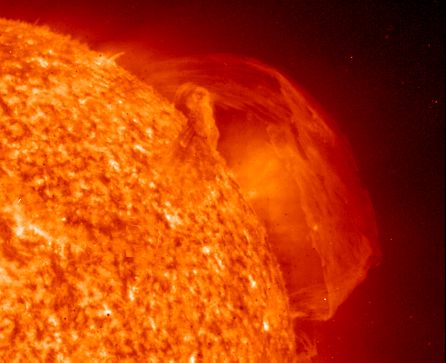 Explanation: On August 27th twisting magnetic fields propelled this huge eruptive prominence a hundred thousand miles above the Sun's surface. The seething plasma of ionized gases is at a temperature of about 150,000 degrees Farenheit and spans over 200,000 miles (about 27 Earths). The Extreme ultraviolet Imaging Telescope (EIT) onboard the space-based SOHO observatory recorded this exquisitely detailed image in the light of ionized Helium atoms from its vantage point in a Halo orbit. This is the largest solar prominence observed by SOHO instruments since they began exploring solar phenomena in early 1996.