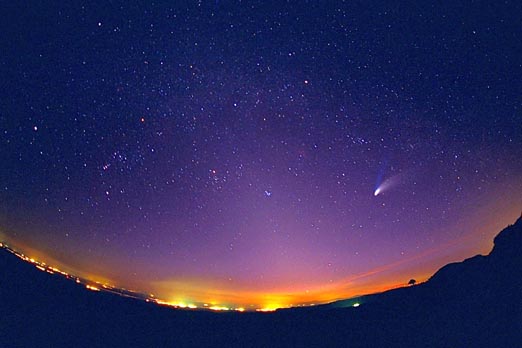 Explanation: Thousands of stars, several constellations, a planet and a comet all graced the western horizon over Ujue, Spain just after sunset on April 4th, 1997. Because the picture was taken with a fisheye lens, much of the whole night sky is visible. Comet Hale-Bopp, with both tails blazing, appears right of center. The brightest star is Sirius near the edge, well to the left of the constellation Orion. The red star above the belt of Orion is Betelgeuse, while the red star near the center is Aldebaran, just to the left of the bright Pleaides star cluster. Many other interesting astronomical objects are visible, including zodiacal light, which is the diffuse triangular glow in the center. Even the planet Mercury appears just over the horizon.