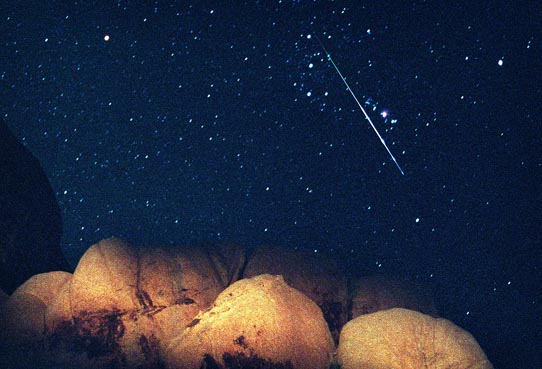 Explanation: Has Orion the Hunter acquired a new weapon? If you turn your head sideways (counterclockwise) you might notice the familiar constellation of Orion, particularly the three consecutive bright stars that make up Orion's belt. But in addition to the stars that compose his sword, Orion appears to have added some sort of futuristic light-saber, possibly in an attempt to finally track down Taurus the Bull. Actually, the bright streak is a meteor from the Perseid Meteor Shower, a shower that put on an impressive display last Tuesday morning, when this photograph was taken. This meteor was likely a small icy pebble shed years ago from Comet Swift-Tuttle that evaporated as it entered Earth's atmosphere.