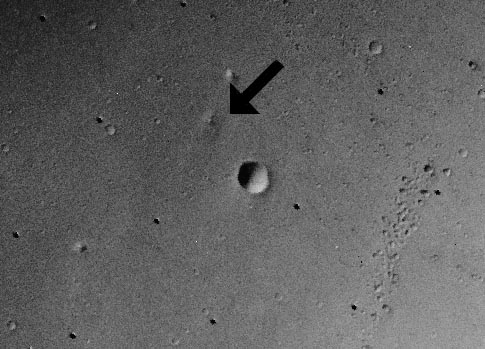 Explanation: Where is Mars Pathfinder? Follow the arrow in the above picture taken by the Viking Orbiter in 1976. From the surface Mars appears covered with rocks, but from orbit Mars appears covered with craters. However, several familiar features are visible in this photograph. To the left (west) of Sagan Memorial Station are the now-familiar twin peaks that dominate the horizon of many Pathfinder photographs. These hills are about one kilometer from the landing site, twice the planned range of Sojourner. Two craters loom nearby: a small one to the east not easily visible here, and a big one to the south of Pathfinder. The landing site is in the dry flood channel named Ares Vallis.