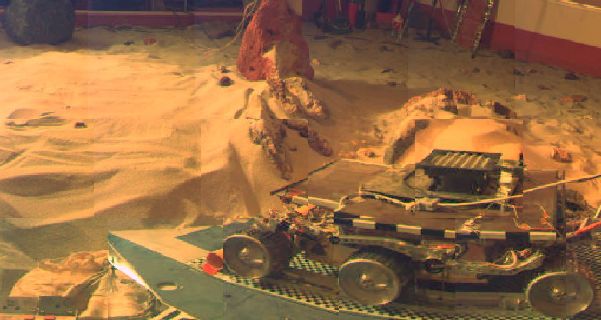 Explanation: Today, July 4th, at about 10:00 AM Pacific Daylight Time (PDT), the Mars Pathfinder spacecraft will land on Mars. Ninety minutes before reaching the surface Pathfinder will begin a flurry of activity. The robot spacecraft is scheduled to vent cooling fluid, jettison its cruise stage, decelerate at 20 gees on atmospheric entry, deploy a 24 foot parachute, jettison its heat shield, slide down a 60 foot bridle, fire solid fuel braking rockets, deploy a cocoon of airbags, separate from the bridle, impact the martian surface, bounce a few times (traveling about 300 - 600 feet between bounces), settle on the surface, deflate the airbags, right itself, deploy its landing petals, and resume communication with planet Earth, all under the autonomous control of the onboard computer. If all goes well, at about 4:30 PM PDT the Pathfinder's camera "IMP" will spring into action recording frame by frame a panoramic view of the surface. Dubbed "Mission Success" the mosaic above is a laboratory simulation of the planned first image sequence to be downlinked from the surface of Mars.