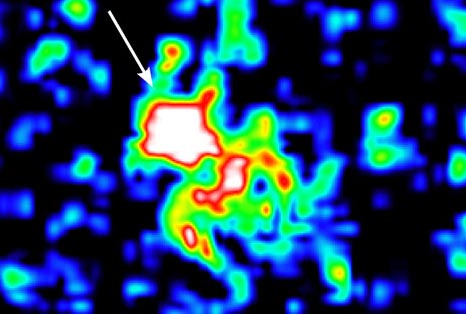 Explanation: Where do gamma-ray bursts (GRBs) originate? The most powerful explosions in the universe have recently been located with record accuracy. But do GRBs occur in galaxies or out alone in deep space? This picture taken with the Hubble Space Telescope of the field surrounding GRB 970228 might provide a clue. It appears to show an extended structure to the lower right of the GRB, which is identified with an arrow. Many astronomers speculate that this extended structure is a distant galaxy, as its colors and subsequent steady emission indicate. Other astronomers worry that the extended emission is variable and so cannot be a galaxy. Astronomers hoping for more cases to study were rewarded just last Monday with a new, well-located event: GRB 970616. The location of this burst was determined by an unprecedented collaboration involving the tandem use of NASA satellites Compton, Ulysses and Rossi.