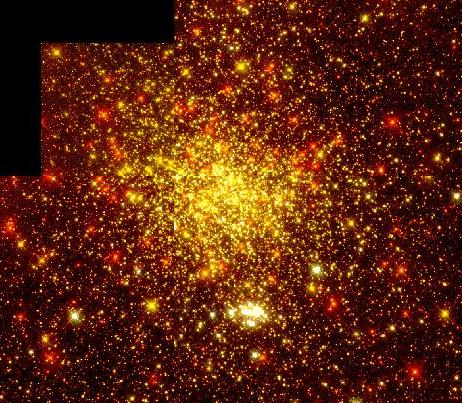 Explanation: NGC1850 is a large cluster of stars located a mere 166,000 light-years from Earth in our neighboring galaxy the Large Magellanic Cloud (LMC). The colors in this beautiful Hubble Space Telescope composite image of the cluster reveal different populations of stars. Yellowish stars are the main cluster stars, sun-like main sequence hydrogen burners about 50 million years old. The white stars are massive, hotter, and younger, about 4 million years old. Radiating strongly in ultraviolet light, they represent a loose cluster themselves, perhaps within 200 light-years of the main cluster. Massive stars which formed in the older main cluster have long since disappeared, ending their lives in spectacular supernova explosions. Did expanding debris from these supernovae trigger the formation of the nearby younger cluster? Probably so. In any event, a few million years from now a similar fate awaits the massive stars of the younger cluster - burning brightly but briefly before they explode sending new clouds of stellar debris into space.