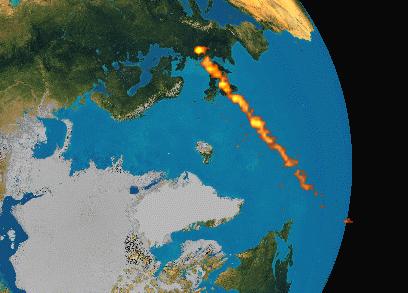 Explanation: Like cosmic snowballs, fluffy comet-like objects the size of houses and composed mostly of water-ice, may be pummeling planet Earth 5 to 30 times a minute. This controversial theory was originally proposed in 1986 by Dr. Louis Frank (U. Iowa) based on data from NASA's Dynamics Explorer 1. It is further supported by recently reported findings from the one year old POLAR spacecraft. Representing a previously unknown class of Solar System objects, these proposed small, icy comets disintegrate in the upper atmosphere at altitudes of 600 to 15,000 miles and so do not pose an impact threat to the Earth's surface or even to spacecraft in low Earth orbit. On breaking up, however, they produce a fleeting trail of clouds of water vapor. Traces of these transient, extremely high altitude clouds can be detected by down looking spacecraft designed to monitor the near-Earth environment. The suspected trail of one such cosmic snowball vaporizing over the Atlantic Ocean and Western Europe at an altitude of 5,000 to 15,000 miles is seen above. It was recorded in a 54 second exposure by POLAR's Visible Imaging System in September of 1996. A map has been added as a background for location reference. If continuous over the history of the Earth's formation, this relatively gentle cosmic snow shower would have been a major source of water for Earth's present life-nurturing oceans and possibly even a source of simple organic compounds.