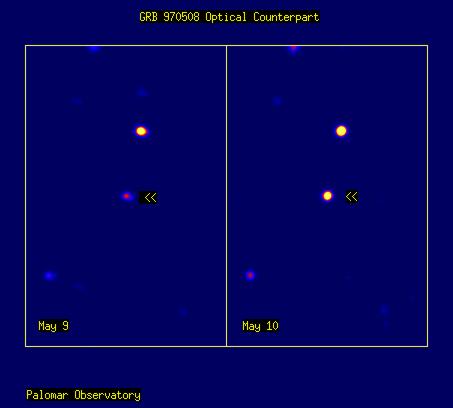 Explanation: New evidence bolsters once controversial claims that Gamma-Ray Bursts (GRBs) are the most powerful explosions ever found by humanity. Two weeks ago, an average GRB became instantly historic when prompt, coincident X-ray and optical emissions were identified. The glow in visible light was particularly interesting because it showed color gaps indicative of absorbing gas at the very distant redshift of 0.8. If GRBs do occur this far into our universe, then radio emission was predicted to peak about a week after the optical emission. Now, late reports do indicate that radio emission has been detected and does peak a week later than the optical. This adds credibility to the claim that these bursts of gamma-radiation indeed occur far from our familiar home Galaxy. Shown above are two photos highlighting the changing optical emission from GRB970508 when it was increasing in brightness. Now light from this enigmatic explosion is fading.