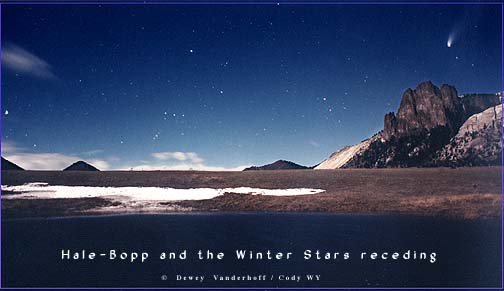 Explanation: Comet Hale-Bopp is still brighter than most constellations. In fact, Comet Hale-Bopp may now hold the record for staying bright the longest. Last week the comet was photographed above in the same field as the constellation Orion, visible in the photograph's center, as well as with Sirius, the brightest star in the night, visible on the far left. Just below Comet Hale-Bopp on the right is the volcanic caldera known as White Mountain.. As the comet heads south, it has become visible to most of the world, now including many observers in the Earth's Southern Hemisphere.