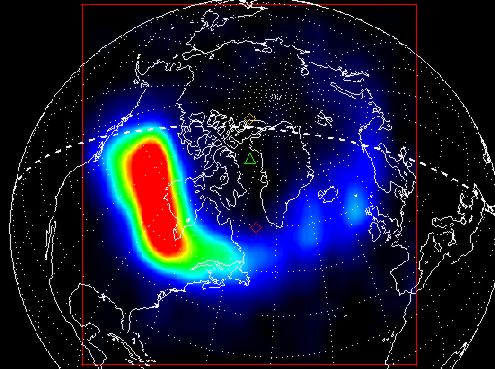 Explanation: On April 7, the SOHO spacecraft spotted a Solar Storm ejecting a cloud of energetic particles toward planet Earth. The plasma cloud's center missed Earth, but high energy particles swept up by Earth's magnetosphere still created a geomagnetic storm! Residents of northerly lattitudes were treated to the spectacle of brilliant aurora as curtains of green and white light danced across the sky. In this image from April 11, the Polar Ionospheric X-ray Imaging Experiment (PIXIE) onboard NASA's orbiting POLAR spacecraft records the strongest X-ray aurora seen in more than a year of operation. The false color image overlaying a map of North America reveals X-rays generated in the upper atmosphere by showers of high energy electrons.