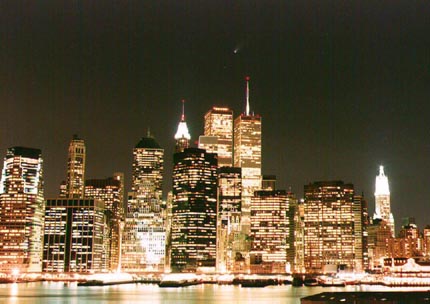 Explanation: What's that point of light above the World Trade Center? It's Comet Hale-Bopp! Both faster than a speeding bullet and able to "leap" tall buildings in its single orbit, Comet Hale-Bopp is also bright enough to be seen even over the glowing lights of one of the world's premier cities. In the foreground lies the East River, while much of New York City's Lower Manhattan can be seen between the river and the comet. Comet Hale-Bopp is now moving away from both the Sun and the Earth. It should, however, should remain visible even in northern cities for at least a month. To find Comet Hale-Bopp, look for the brightest object in the northwest sky just after sunset - or wait for its return in 2400 years.