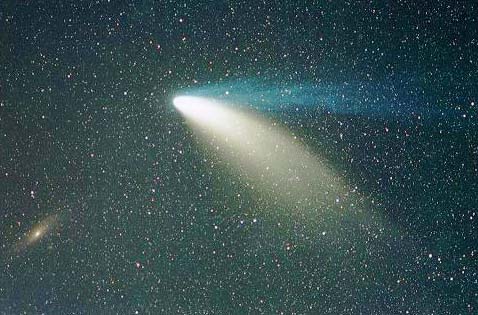 Explanation: Which is closer: the comet or the galaxy? Answer: the comet. In its trek through the inner Solar System, Comet Hale-Bopp has passed nearly in front of the Andromeda Galaxy (M31), seen on the lower left. At the time of this picture, March 27th, Comet Hale-Bopp was about 10 light-minutes from the Earth, while M31 remained about 3 million light-years distant. By contrast, light can cross the Earth in about 1/20th of a second, and light takes about one second to reach Earth's Moon. Comet Hale-Bopp is one of the largest comets ever recorded, and although its' nucleus has never been photographed, it is estimated from brightness and spin measurements to be about 40 kilometers across. In contrast, Comet Halley in 1987 was measured to be 15 km, and Comet Hyakutake in 1996 was estimated to be no more than 10 km.