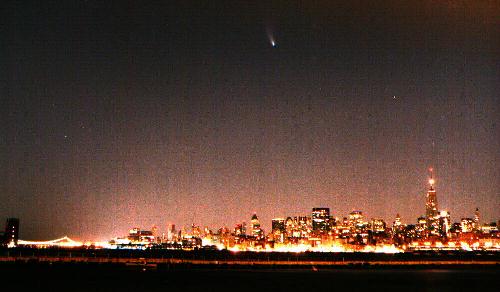 Explanation: Undaunted by the artificial glow from one of the most famous urban skylines on Earth, comet Hale-Bopp shines above the city of New York, USA. Photographed on March 23rd, this view from New Jersey shows the Hudson River in the foreground, the Empire State Building at the right, the George Washington Bridge at the left, and the comet with a visible tail above. The comet lies at a distance of about 120 million miles from New York. As bright as this comet has turned out to be, it might have been even brighter. On May 6, Hale-Bopp's orbit will take it within about 10 million miles of the point in the Earth's orbit which was occupied by planet Earth itself in early January. If the comet had also reached this point in January, it would have come almost as close to Earth as comet Hyakutake did last year. At that distance, Hale-Bopp might have been 100 times brighter than it is now, reaching -5th or -6th magnitude!