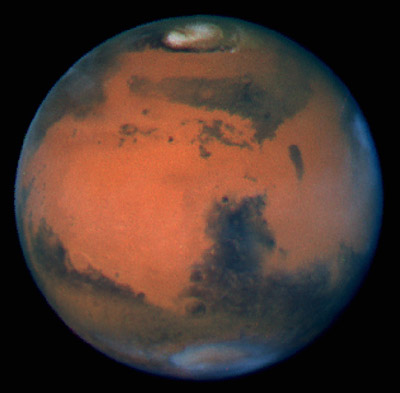 Explanation: Would Mars be a nice place to visit? Sometimes. Much of Mars undergoes severe changes in climate during its orbit around the Sun, ranging from extreme cold to temperatures enjoyable by humans. But Mars is usually a nice place to visit for hardy spacecraft, and in fact the Mars Pathfinder and Mars Global Surveyor missions are currently headed for the "Red Planet." In preparation for the scheduled Mars Pathfinder landing on July 4th, 1997, the Earth-Orbiting Hubble Space Telescope recently took the above high resolution photograph. The picture shows the onset of Martian summer (northern hemisphere) when, apparently, the northern polar cap recedes to uncover dark sand dunes.