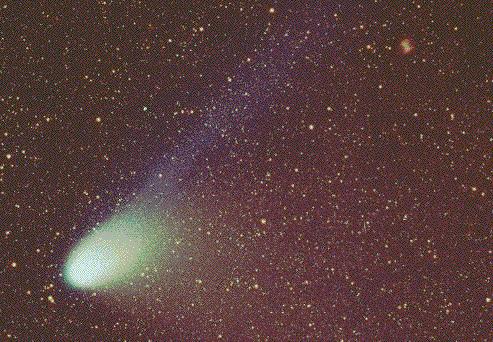 Explanation: Comet Hale-Bopp is now slowly moving across the morning sky. During its trip to our inner Solar System, the comet passes in front of several notable objects. Here Comet Hale-Bopp was photographed on February 11th superposed nearly in front of the picturesque Dumbbell Nebula, visible on the upper right. Comet Hale-Bopp is now first magnitude - one of the brightest objects in the morning sky. APOD, always in search of interesting and accurate astronomy pictures, issues the following informal challenge: that Comet Hale-Bopp be photographed in color with both easily recognizable foreground and background objects. For instance, in late March, it might be possible to photograph the comet with the Eiffel Tower in the foreground and the Andromeda galaxy (M31) in the background. Such superpositions would not only contrast human and cosmic elements, but give angular perspective on the size of the comet's tail.