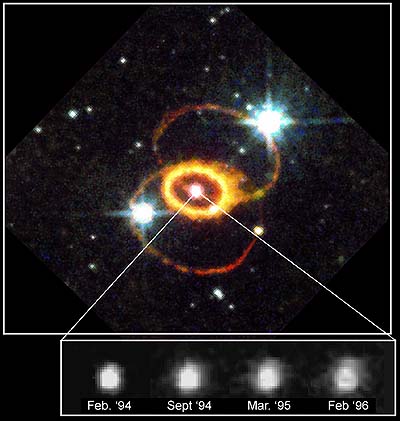 Explanation: Ten years ago the most notable supernova of modern times was observed. In February 1987, light reached Earth from a star which exploded in the nearby Large Magellanic Cloud galaxy. Supernova 1987a remains the closest supernova since the invention of the telescope. The explosion catapulted a tremendous amount of gas, light, and neutrinos into interstellar space. When observed by the Hubble Space Telescope (HST) in 1994, large strange rings were discovered whose origin is still mysterious, although thought to have been expelled even before the main explosion. More recent HST observations shown in the inset, however, have uncovered something actually predicted: the expanding fireball from the exploding star. The above high resolution images resolve two blobs flung out from the central explosion.