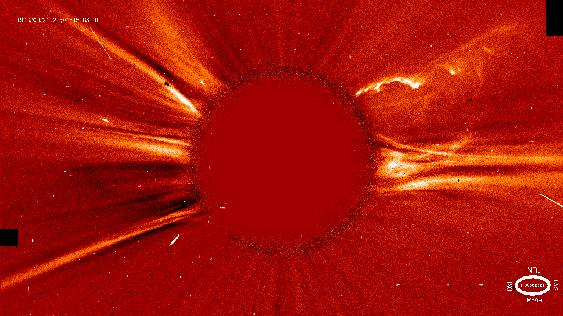 Explanation: The Sun is leaking. In fact, it is gushing: particles stream away from the Sun at hundreds of kilometers per second. Some of these particles strike the Earth and cause aurora. Most particles, however, either surround the Sun as a huge solar corona or glide into interstellar space as the solar wind. Don't worry about the Sun totally evaporating - it loses too little mass to have any lasting effect. The above false-color picture was taken with the Large Angle and Spectrometric Coronograph on board the SOlar and Heliospheric Observatory (SOHO). This instruments blocks out the central solar disk so it can image the regions surrounding the Sun. The large streamers visible are typical. Where these charged ions get their enormous streaming energy is still a mystery!