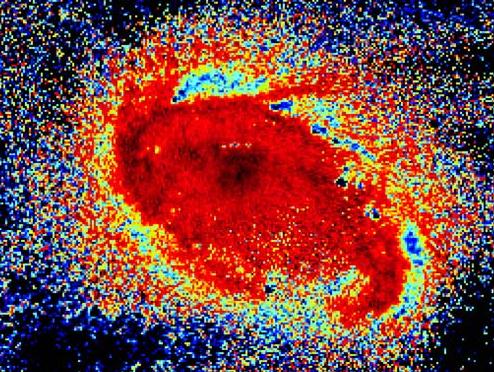 Explanation: In a cartwheel-shaped galaxy far, far away, huge comet-shaped clouds of gas have been discovered racing through the nucleus at about 700,000 miles per hour. The aptly named Cartwheel Galaxy is actually about 500 million light years distant, its suggestive shape created by a head-on collision with a smaller galaxy. Researchers studying this disrupted galaxy using Hubble Space Telescope data recently discovered immense gaseous structures with heads a few hundred light years across and tails thousands of light years long. The fast moving dense gas clouds appear as blue comet-like shapes, mostly along the upper edge of the nucleus, in this false color close-up of the Cartwheel's central region. Their shape, like a boat's bow wave, was probably created by the dense clouds moving through less dense material.