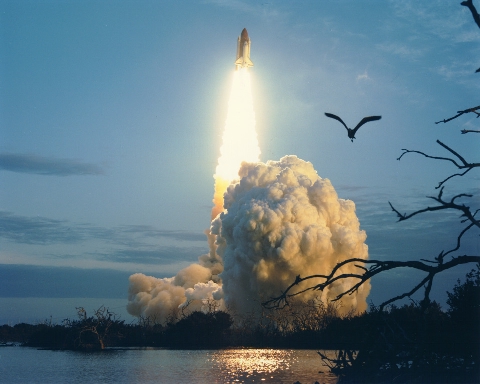 Explanation: Rocket engines blazing, the Space Shuttle Columbia arcs into Florida's morning sky after lifting off from pad 39-A at Kennedy Space Center. Seen here in January of 1996, this space shuttle has been operational for more than 15 years -- racking up 20 flights and over 77 million miles in orbit while spending 177 days in space. The first member of NASA's shuttle fleet, Columbia shares it name with another famous spacecraft launched from pad 39-A, the Apollo 11 command module. Having begun its career with STS-1 in April of 1981, Columbia, also kown as orbiter vehicle 102 (OV-102), is now being prepared for the STS-80 mission scheduled to launch this month.