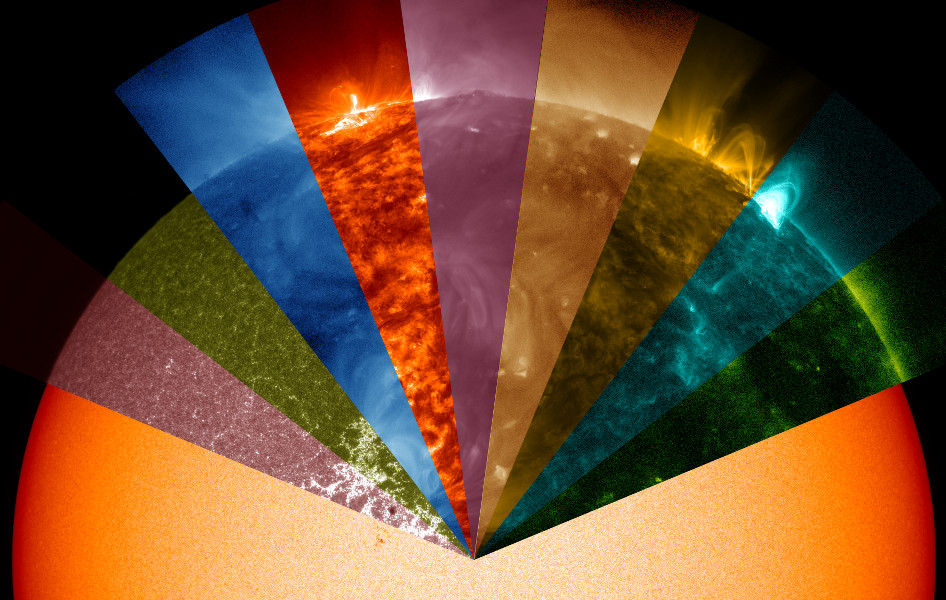 Explanation: Today, the solstice is at 17:11 Universal Time, the Sun reaching the southernmost declination in its yearly journey through planet Earth's sky. The December solstice marks the astronomical beginning of winter in the northern hemisphere and summer in the south. To celebrate, explore this creative visualization of the Sun from visible to extreme ultraviolet wavelengths, using image data from the orbiting Solar Dynamics Observatory (SDO). Against a base image made at a visible wavelengths, the wedge-shaped segments show the solar disk at increasingly shorter ultraviolet and extreme ultraviolet wavelengths. Shown in false-color and rotating in a clockwise direction, the filters decrease in wavelength from 170 nanometers (in pink) through 9.4 nanometers (green). At shorter wavelengths, the altitude and temperature of the regions revealed in the solar atmosphere tend to increase. Bright at visible wavelengths, the solar photosphere looks darker in the ultraviolet, but sunspots glow and bright plasma traces looping magnetic fields. Watch the filters sweep around the solar disk in this animation of SDO's multiwavelength view of the Sun.