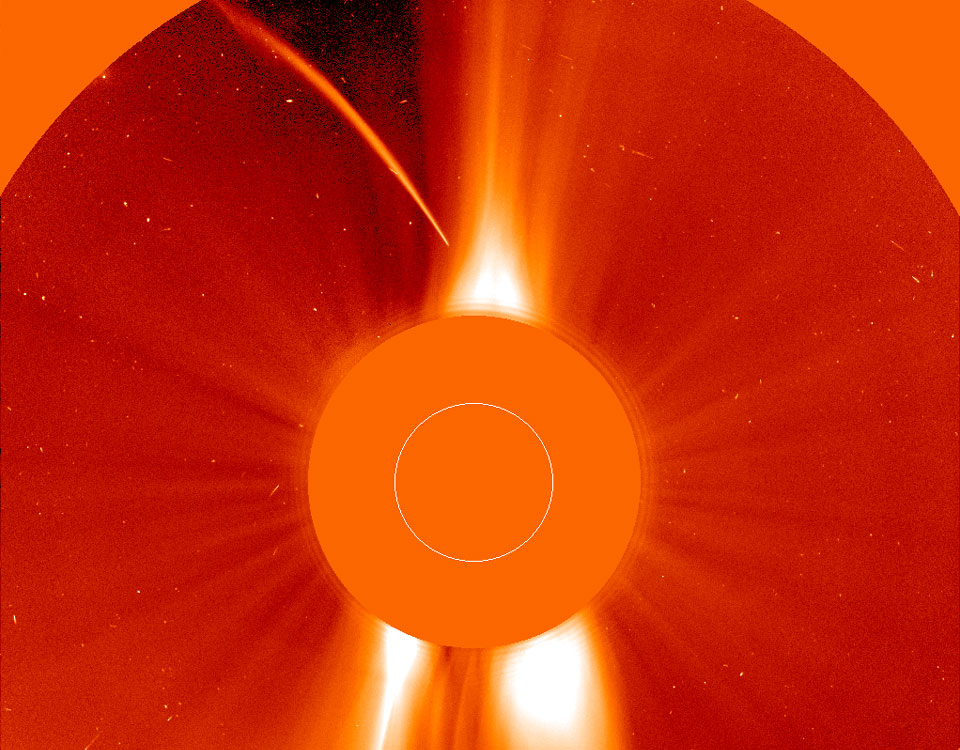 Explanation: Arcing toward a fiery fate, this Sungrazer comet was recorded by the SOHO spacecraft's Large Angle Spectrometric COronagraph(LASCO) on December 23, 1996. LASCO uses an occulting disk, partially visible at the lower right, to block out the otherwise overwhelming solar disk allowing it to image the inner 8 million kilometers of the relatively faint corona. The comet is seen as its coma enters the bright equatorial solar wind region (oriented vertically). Positioned in space to continuously observe the Sun, SOHO has now been used to discover over 1,500 comets, including numerous sungrazers. Based on their orbits, the vast majority of sungrazers are believed to belong to the Kreutz family of sungrazing comets created by successive break ups from a single large parent comet that passed very near the Sun in the twelfth century. The Great Comet of 1965, Ikeya-Seki, was also a member of the Kreutz family, coming within about 650,000 kilometers of the Sun's surface. Passing so close to the Sun, Sungrazers are subjected to destructive tidal forces along with intense solar heat. This small comet, known as the Christmas Comet SOHO 6, did not survive. Later this year, Comet ISON, potentially the brightest sungrazer in recorded history but not a Kreutz sungrazer, is expected to survive.