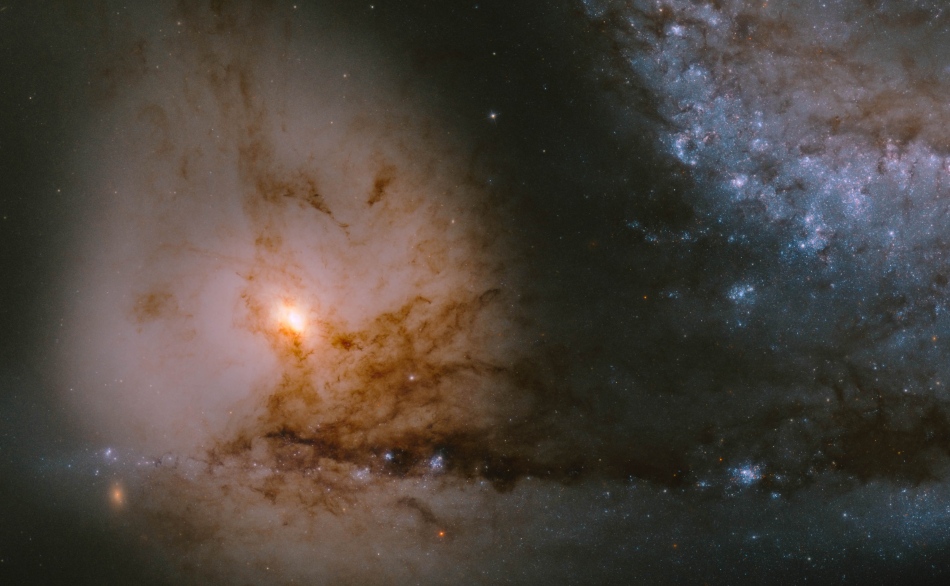 Explanation: Dwarf galaxy NGC 5195 is best known as the smaller companion of spiral M51, the Whirlpool galaxy. Seen together they seem to trace the curve and dot of a cosmic question mark, recorded in Lord Rosse's 19th century drawings as one of the original spiral nebulae. Dwarfed by enormous M51 (aka NGC 5194), NGC 5195 spans about 20,000 light-years. A close encounter with M51 has likely triggered star formation and enhanced that galaxy's prominent spiral arms. Processed from image data available in the Hubble Legacy Archive, this majestic close-up of NGC 5195 makes it clear that the dwarf galaxy now lies behind M51. A tidal bridge of dark dust clouds and young blue star clusters stretches from the outskirts of M51 on the right, appearing in silhouette against the dwarf galaxy's yellowish glow. The famous pair of interacting galaxies lie some 30 million light-years away, toward the handle of the Big Dipper, and the constellation of the Hunting Dogs.