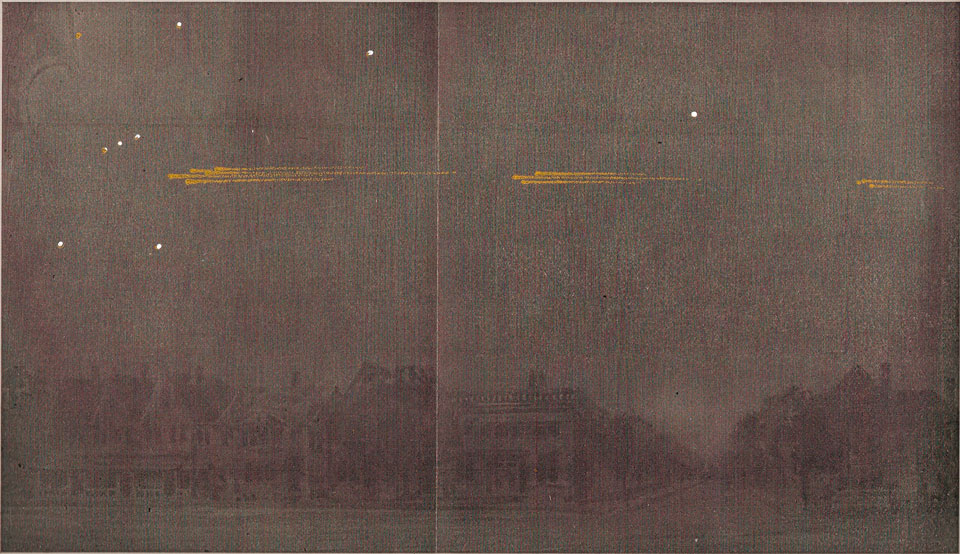 Explanation: One hundred years ago today the Great Meteor Procession of 1913 occurred, a sky event described by some as "magnificent" and "entrancing" and which left people feeling "spellbound" and "privileged". Because one had to be in a right location, outside, and under clear skies, only about 1,000 people noted seeing the procession. Lucky sky gazers -- particularly those near Toronto, Canada -- had their eyes drawn to an amazing train of bright meteors streaming across the sky, in groups, over the course of a few minutes. A current leading progenitor hypothesis is that a single large meteor once grazed the Earth's atmosphere and broke up. When the resulting pieces next encountered the Earth, they came in over south-central Canada, traveled thousands of kilometers as they crossed over the northeastern USA, and eventually fell into the central Atlantic ocean. Pictured above is a digital scan of a halftone hand-tinted image by the artist Gustav Hahn who was fortunate enough to witness the event first hand. Although nothing quite like the Great Meteor Procession of 1913 has been reported since, numerous bright fireballs -- themselves pretty spectacular -- have since been recorded, some even on video.