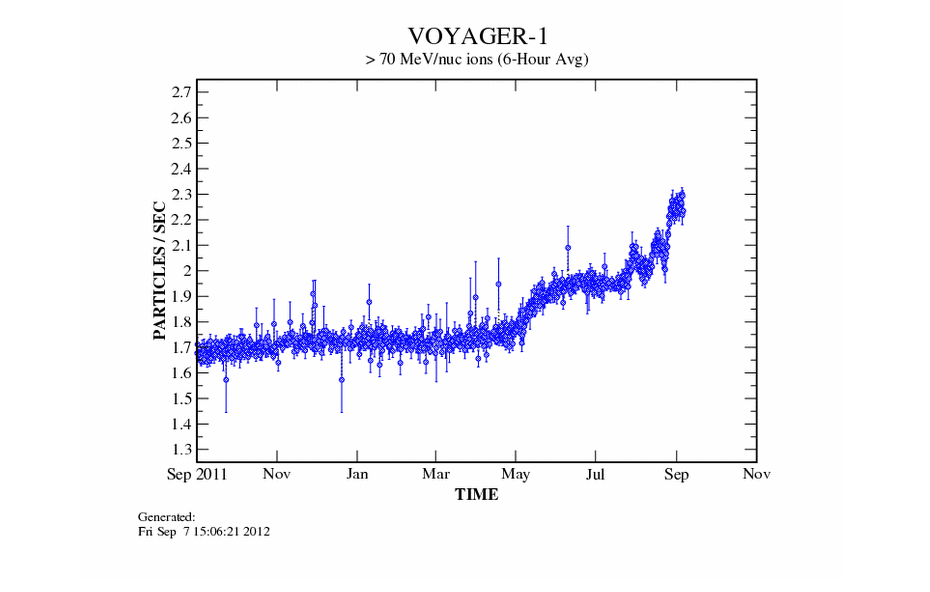 Explanation: Launched on a grand tour of the outer planets in 1977, by good fortune the twin Voyager spacecraft were also headed in the general direction of the Sun's motion relative to nearby stars. Thirty five years later, Voyager 1 appears to be nearing the boundary of the Sun's heliosphere and interstellar space. Of course the heliosphere is the realm of the Sun defined by the influence of the solar wind and the Sun's magnetic field. But how can you tell when your spacecraft crosses the boundary into interstellar space? One clue would be a sudden increase in the detection of energetic cosmic rays. The high energy particles stream through interstellar space accelerated by distant supernovae in our galaxy, but are normally deflected or slowed by the heliosphere. Covering a 12 month period (September 2011 to 2012), this plot does show a dramatic increase in the rate of cosmic ray particle detection in past months by the Voyager 1 spacecraft. Voyager 1 is now 18 billion kilometers (17 light hours, 122 Astronomical Units) from the Sun and may soon be the first spacecraft from Earth to enter the realm of the stars.