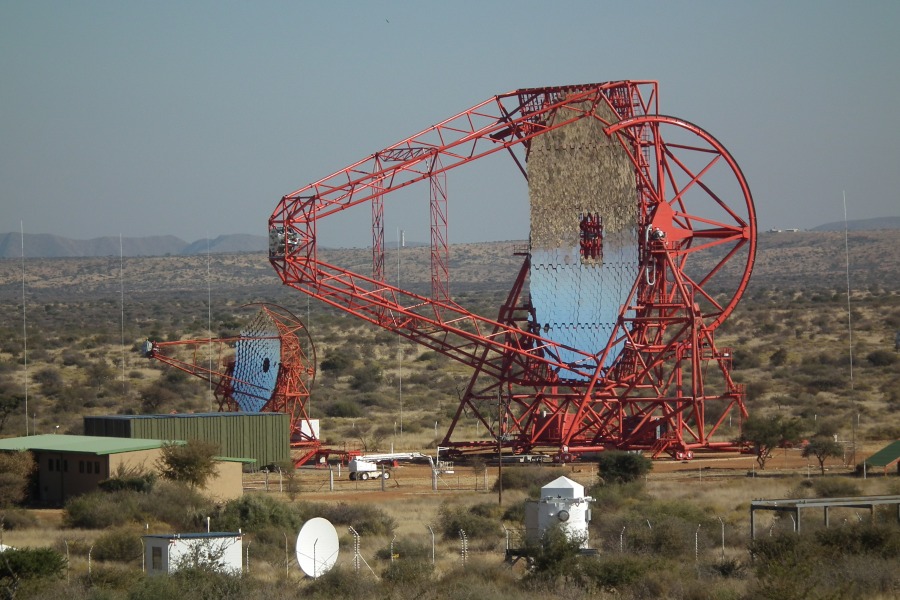 Explanation: The largest of its kind, the High Energy Stereoscopic System (H.E.S.S.) II telescope stands in the foreground of this photo. Tilted horizontally it reflects the inverted landscape of the Namibian desert in a segmented mirror 24 meters wide and 32 meters tall, equal in area to two tennis courts. Now beginning an exploration of the Universe at extreme energies, H.E.S.S. II saw first light on July 26. Most ground-based telescopes with lenses and mirrors are hindered by the Earth's nurturing, protective atmosphere that blurs images and scatters and absorbs light. But the H.E.S.S. II telescope is a cherenkov telescope, designed to detect gamma rays - photons with over 100 billion times the energy of visible light - and actually requires the atmosphere to operate. As the gamma rays impact the upper atmosphere they produce air showers of high-energy particles. A large camera at the mirror's focus records in detail the brief flashes of optical light, called cherenkov light, created by the air shower particles. The H.E.S.S. II telescope operates in concert with the array of four other 12 meter cherenkov telescopes to provide multiple stereoscopic views of the air showers, relating them to the energies and directions of the incoming cosmic gamma rays.