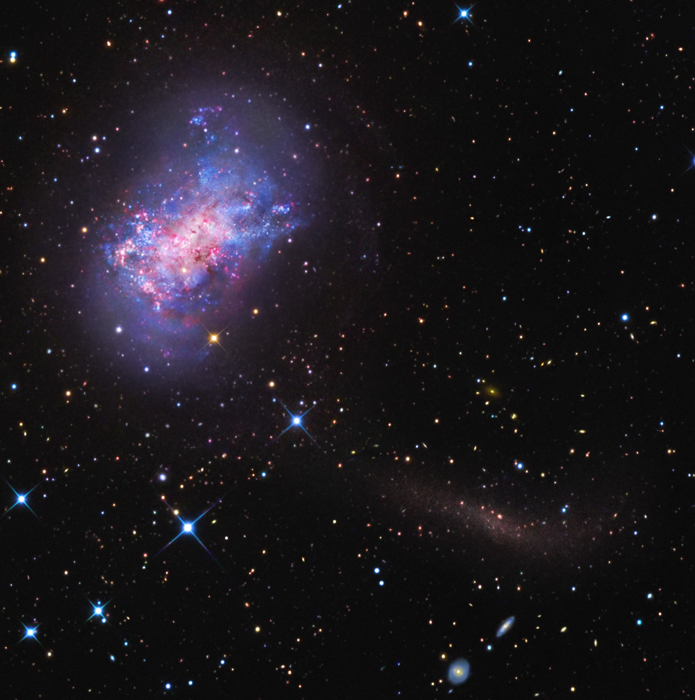 Explanation: A mere 12.5 million light-years from Earth, irregular dwarf galaxy NGC 4449 lies within the confines of Canes Venatici, the constellation of the Hunting Dogs. About the size of our Milky Way's satellite galaxy the Large Magellanic Cloud, NGC 4449 is undergoing an intense episode of star formation, evidenced by its wealth of young blue star clusters, pinkish star forming regions, and obscuring dust clouds in this deep color portrait. It also holds the distinction of being the first dwarf galaxy with an identified tidal star stream, faintly seen at the lower right. Placing your cursor over the image reveals an inset of the stream resolved into red giant stars. The star stream represents the remains of a still smaller infalling satellite galaxy, disrupted by gravitational forces and destined to merge with NGC 4449. With relatively few stars, small galaxies are thought to possess extensive dark matter halos. But since dark matter interacts gravitationally, these observations offer a chance to examine the significant role of dark matter in galactic merger events. The interaction is likely responsible for NGC 4449's burst of star formation and offers a tantalizing insight into how even small galaxies are assembled over time.