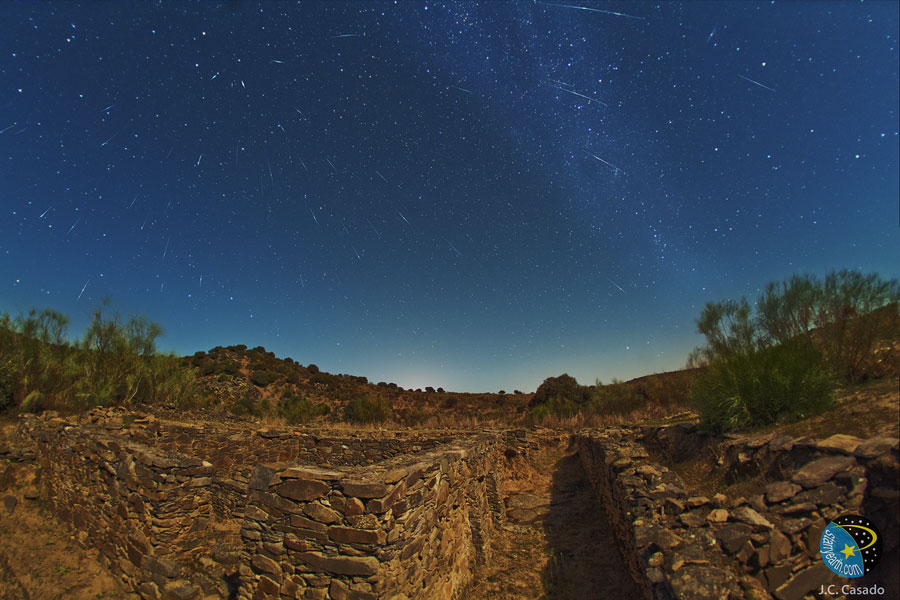 Explanation: What are those streaks in the sky? They're meteors from the Draconids meteor shower that peaked earlier this month. The above composite image captured numerous meteor streaks over 90 minutes above the Celtic ruins of Capote in Badajoz province, Spain. The particles that caused these meteors were typically the size of a pebble and were expelled long ago from the nucleus of comet 21P/Giacobini-Zinner. Most of the above meteors can be traced back to a single radiant emanating from the constellation of the Dragon (Draco). Reports from this year's meteor shower indicate that the Draconids were unusually good this year with activity was concentrated around 8 pm UT on October 8. The most intense Draconid meteor showers in recent history occurred in 1933 and 1946 when thousands of meteors per hour were recorded as the Earth plowed through particularly dense streams of comet debris. Although the Draconids occur every October, it is usually difficult to know just how active each year's meteor shower will be.

APOD Challenge: How many meteors can you find on the above image?
Tomorrow's picture: open space < | Archive | Index | Search | Calendar | RSS | Education | About APOD | Discuss | >