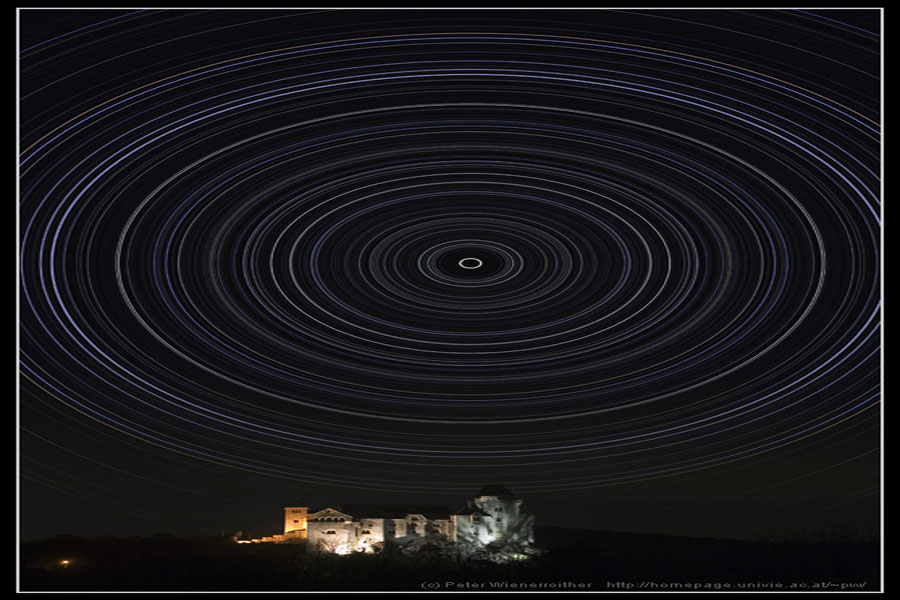 Explanation: You could be the first person ever to take a real single-exposure image like this. The above image from Vienna, Austria is not real in the sense that the 360 degree star trails in the sky appear only because of a digital trick. Real star trails observed above Vienna could never go 360 degrees around because the Sun would rise at some time during the exposure and dominate the frame. Star trails of any length occur because as the Earth spins on its axis, the sky seems to rotate around us. This motion, called diurnal motion, produces the beautiful concentric arcs traced by stars during long time exposures. Towards the middle of the above digitally stretched picture is the North Celestial Pole (NCP), easily identified as the point in the sky at the center of all the star trail arcs. The star Polaris, commonly known as the North Star, made the very short bright circle near the NCP. Walter Lewin, though, has asked APOD to pose this as a challenge to astrophotographers: create a real single-exposure image of a clear night sky that features 360 degree star trails. Of course, such an image would only be possible near the poles of our fair planet, because only there could a nighttime run for more than 24 hours.