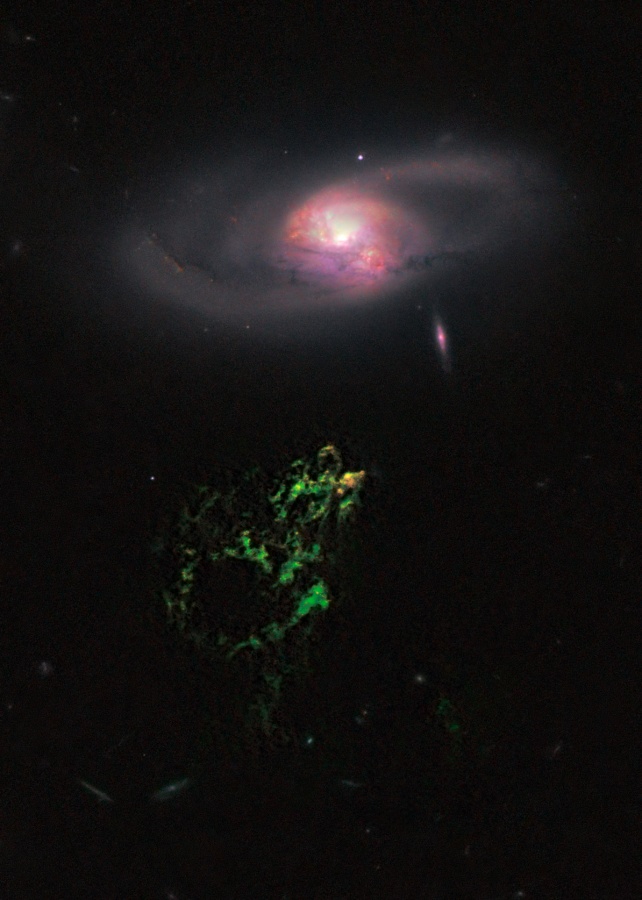 Explanation: Hanny's Voorwerp, Dutch for "Hanny's Object", is enormous, about the size of our own Milky Way Galaxy. Glowing strongly in the greenish light produced by ionized oxygen atoms, the mysterious voorwerp is below spiral galaxy IC 2497 in this view from the Hubble Space Telescope. Both lie at a distance of some 650 million light-years in the faint constellation Leo Minor. In fact, the enormous green cloud is now suspected to be part of a tidal tail of material illuminated by a quasar inhabiting the center of IC 2497. Powered by a massive black hole, the quasar suddenly turned off, leaving only galaxy and glowing voorwerp visible in telescopes at optical wavelengths. The sharp Hubble image also resolves a star forming region in the voorwerp, seen in yellow on the side near IC 2497. That region was likely compressed by an outflow of gas driven from the galaxy's core. The remarkable mystery object was discovered by Dutch schoolteacher Hanny van Arkel in 2007 while participating online in the Galaxy Zoo project. Galaxy Zoo enlists the public to help classify galaxies found in the Sloan Digital Sky Survey, and more recently in deep Hubble imagery.