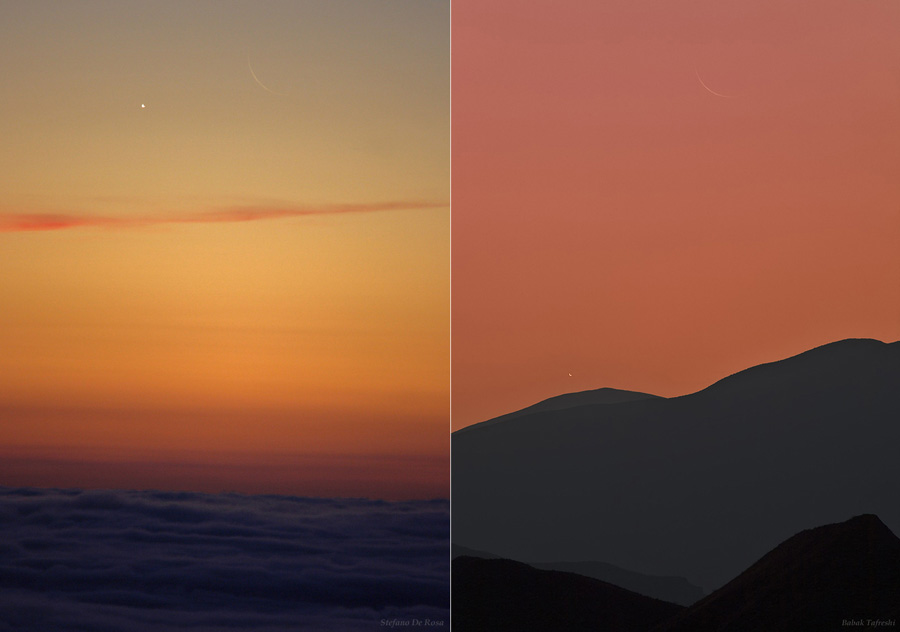 Explanation: Venus rose in a glowing dawn sky on November 5th, just before the Sun. For early morning risers, its brilliant crescent phase was best appreciated with binoculars or a small telescope. On that day the crescent Venus also appeared in close conjunction with another lovely crescent that hugs the eastern horizon in planet Earth's morning skies, the waning crescent Moon. The celestial photo-op is captured here from two locations. Left, separated by less than a degree, the two crescents hover above a sea of clouds. The picture was recorded from an Alpine mountain pass not far from Turin, Italy. On the right is a sharp telephoto view taken before an earlier sunrise, farther east in the Alborz Mountains of Iran. In steady skies the slender Moon is still sliding toward Venus, the bright planet's compact crescent just clearing the mountainous horizon. For now, the crescent phase of Venus remains easy to enjoy with binoculars in November's dawn skies. The first observations of the phases of Venus, made by Galileo with his telescope in 1610, agreed with the predictions of the heliocentric Copernican model of the Solar System.