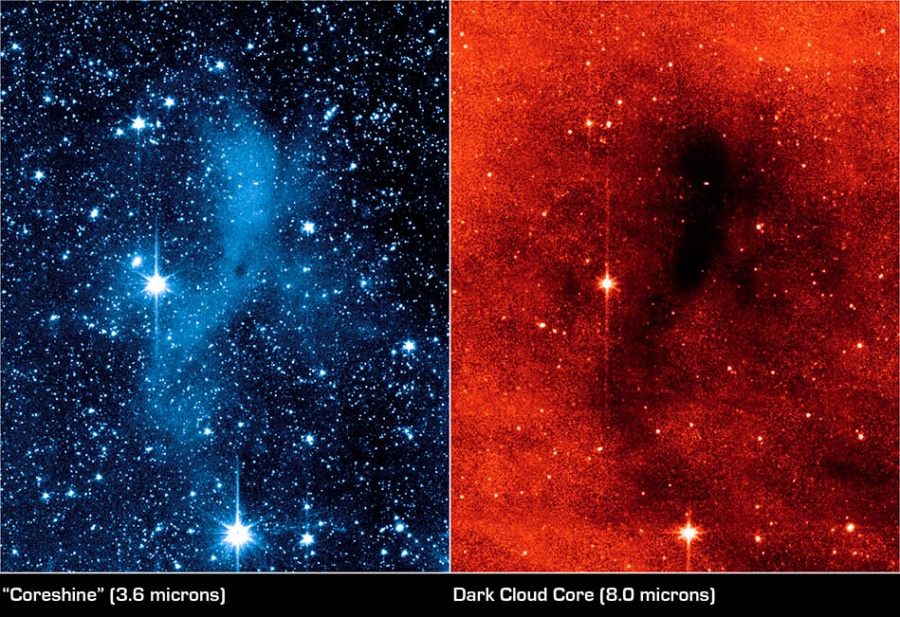 Explanation: Stars and their planets are born in cold, dark, interstellar clouds of gas and dust. While exploring the clouds at infrared wavelengths, astronomers have made a surprising discovery -- dozens of cases where dense cloud cores shine by reflecting infrared starlight. Based on archival Spitzer Space Telescope data, these panels illustrate the newly described phenomenon, known as coreshine. At longer infrared wavelengths (right) the core of cloud Lynds 183 is dark, but at shorter infrared wavelengths (left) the core clearly shines, scattering light from nearby stars. As seen in these panels, the elongated core covers a mere 1.5 light-years. The scattering requires dust grains that are about 10 times larger than previously thought to exist in the clouds, about 1 micron in size instead of 0.1 micron. For comparison, a human hair is about 100 microns thick. The larger dust grains indicated by coreshine could change models of the early phases of star and planet formation, a still mysterious process hidden within the interstellar clouds. Dark nebula Lynds 183 lies around 325 light-years away in the constellation Serpens.