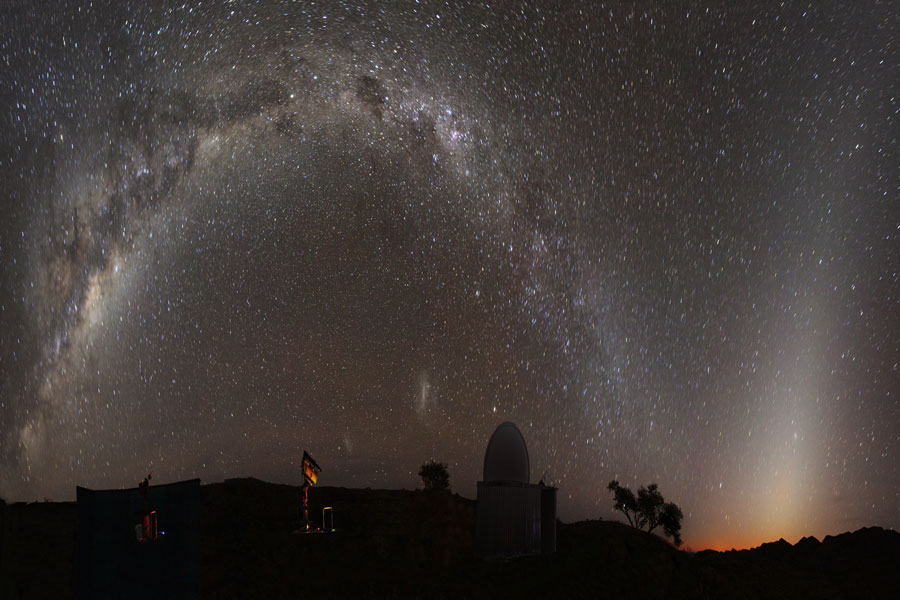 Explanation: An unusual triangle of light is visible this time of year just before dawn, in the northern hemisphere. Once considered a false dawn, this triangle of light is actually zodiacal light, light reflected from interplanetary dust particles. The bright reflecting triangle is clearly visible on the right of the above horizontally-compressed image taken just after sunset from Namibia in the southern hemisphere in 2009 June. The central band of our Milky Way Galaxy on the left first mirrors the zodiacal band on the right but then curves around the sky. The faint smudges inside the arch of the Milky Way are the Large and Small Magellanic Clouds. Zodiacal dust orbits the Sun predominantly in the same plane as the planets: the ecliptic. Zodiacal light is so bright in the north this time of year because the dust band is oriented nearly vertical at sunrise, so that the thick air near the horizon does not block out relatively bright reflecting dust. Zodiacal light is also bright for people in Earth's northern hemisphere in March and April just after sunset. In the southern hemisphere, zodiacal light is most notable after sunset in late summer, and brightest before sunrise in late spring.