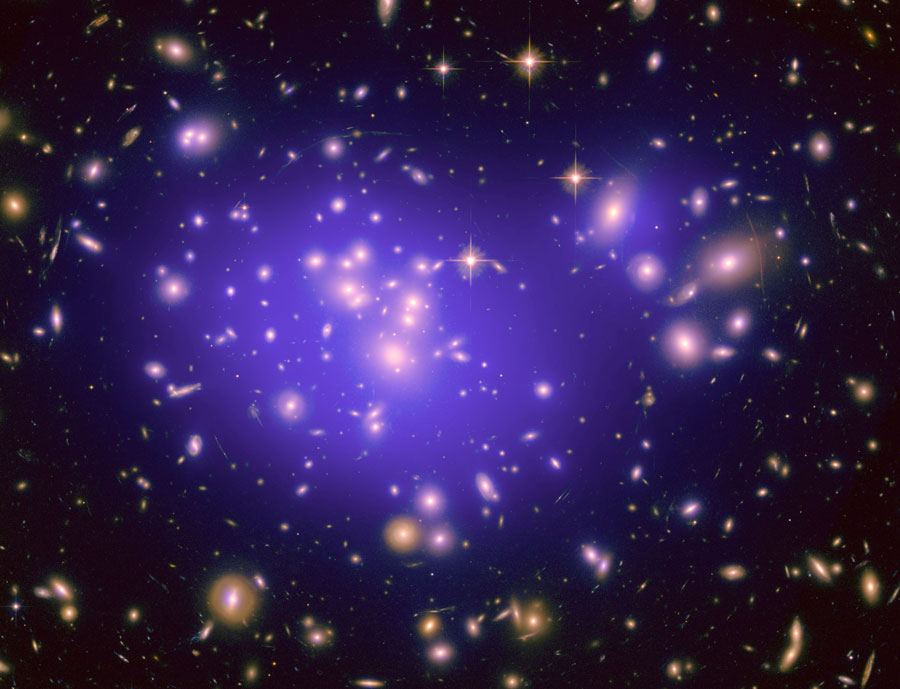 Explanation: What's the matter with this cluster of galaxies? To find out what forms matter takes in the Abell 1689 cluster requires not only deep images from telescopes like the Hubble Space Telescope, but detailed computer modeling as well. To start, almost every fuzzy yellow patch in the above image is an entire galaxy. A close inspection, however, shows that many background galaxies are strangely magnified and distorted into long curving arcs by the gravitational lens deflections of the cluster. Computer analyses of the placement and smoothness of these arcs indicate that in addition to the matter in the galaxies you can see, the cluster must also contain a significant amount of dark matter such as the model digitally superposed in purple. Now Abell 1689 remains enigmatic because the arcs are so numerous and diverse that no single dark matter model has emerged that can explain them all and still remain consistent with dark matter models needed to constrain their motion. Still, the detailed information available from clusters of galaxies like Abell 1689 gives hope that one day full solutions will be found that will not only fully reveal the dark matter in clusters, but also reveal the amounts of dark energy in the universe needed to lie along the line of sight to the distant arcs.