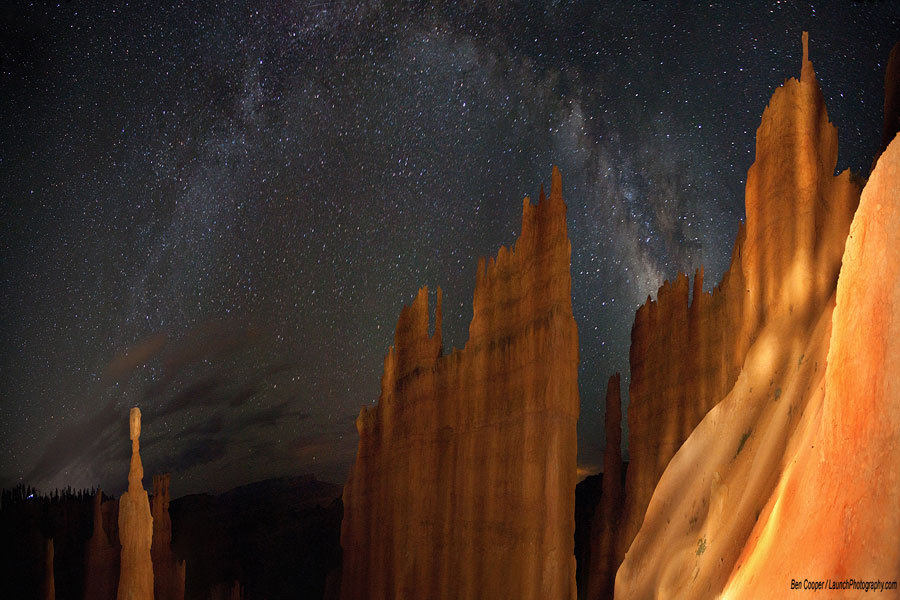 Explanation: What are those strange rock structures? They are towers and walls of sedimentary rock that are particularly plentiful in Bryce Canyon in Utah, USA. The rock columns may rise higher than 50 meters and are called hoodoos. On the far left is Thor's Hammer, perhaps the most famous hoodoo. The tall rock columns were carved, most typically, when a unusually dense cap of rock provided a layer of protection to rock underneath from rain-based erosion. In the above panoramic picture taken earlier this month and compressed horizontally, the foreground rocks were momentarily illuminated by a roving spotlight. Visible in the background are a few water clouds a few kilometers away hovering over the nearby Earth. Visible well beyond that are thousands of individually discernible stars averaging a few hundred light years away in the nearby Milky Way Galaxy. Far in the distance lie billions of stars that are thousands of light years away and compose the faintly glowing arch that is the visible central band of the flat disk of our Milky Way. Over many years, wind and rain will eventually cause the tops of the hoodoos to topple, whereafter the underlying column will likely completely erode away.