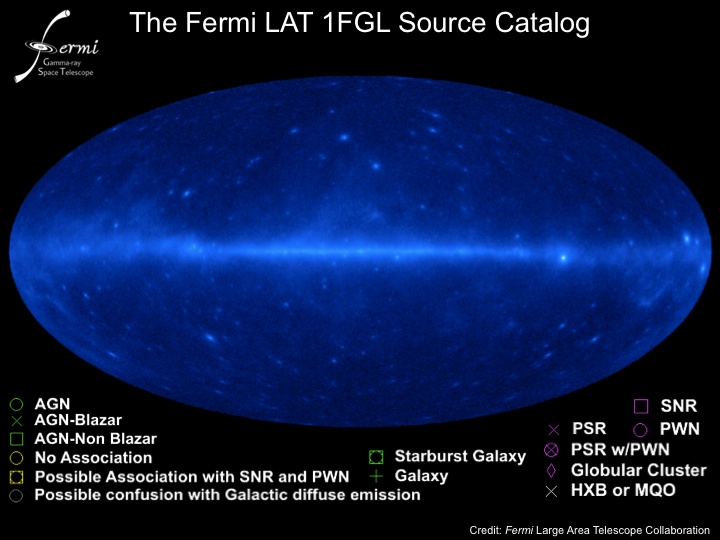 Explanation: What shines in the gamma-ray sky? The most complete answer yet to that question is offered by the Fermi Gamma-ray Space Telescope's first all-sky catalog. Fermi's sources of cosmic gamma-rays feature nature's most energetic particle accelerators, ultimately producing 100 MeV to 100 GeV photons, photons with more than 50 million to 50 billion times the energy of visible light. Distilled from 11 months of sky survey data using Fermi's Large Area Telescope (LAT), the 1,451 cataloged sources include energetic star burst galaxies and active galactic nuclei (AGN) far beyond the Milky Way. But within our own galaxy are many pulsars (PSR) and pulsar wind nebulae (PWN), supernova remnants (SNR), x-ray binary stars (HXB) and micro-quasars (MQO). Fermi's all sky map is shown centered on the Milky Way with the diffuse gamma-ray emission from the Galactic plane running horizontally through the frame. To locate the cataloged gamma-ray sources, just slide your cursor over the map. For now, 630 of the sources cataloged at gamma-ray energies remain otherwise unidentified, not associated with sources detected at lower energies.