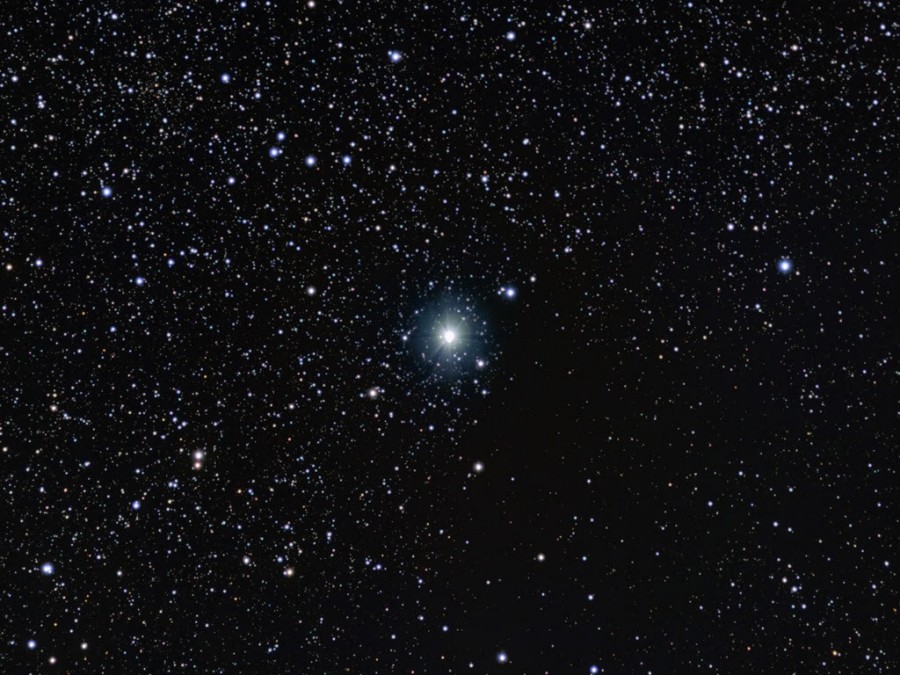 Explanation: Every 27 years Epsilon Aurigae fades, remaining dim for roughly two years before growing bright again. Since the 19th century, astronomers have studied the mystery star, eventually arguing that Epsilon Aur, centered in this telescopic skyview, was actually undergoing a long eclipse by a dark companion object. But the nature of the companion and even the state of bright star itself could not be pinned down by observations. Continuing to collect evidence, Citizen Sky, a team of professional and amateur astronomers, is studying the current eclipse of Epsilon Aur, reporting that it began in August 2009 and by late December had reached its deepest point. Epsilon Aur is now expected to remain dim for all of 2010, before rapidly regaining normal brightness in 2011. Meanwhile, recent infrared data from the Spitzer Space Telescope supports a model for the enigmatic system that identifies Epsilon Aur as a large but lower mass star near the end of its life, periodically eclipsed by a single star embedded in a dusty disk. The disk is estimated to have a radius of about 4 AU, or 4 times the Earth-Sun distance, and to be about 0.5 AU thick.


Note: An APOD editor will review astronomy images of 2009,
hosted by the Amateur Astronomers Association of New York tonight at the American Museum of Natural History, NYC.