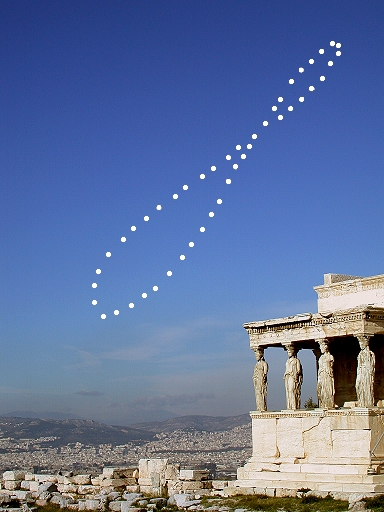 Explanation: If you took a picture of the Sun at the same time each day, would it remain in the same position? The answer is no, and the shape traced out by the Sun over the course of a year is called an analemma. The Sun's apparent shift is caused by the Earth's motion around the Sun when combined with the tilt of the Earth's rotation axis. The Sun will appear at its highest point of the analemma during summer and at its lowest during winter. Today, the Winter Solstice day in Earth's northern hemisphere, the Sun is at the bottom of the analemma. Analemmas created from different latitudes would appear at least slightly different, as well as analemmas created at a different time each day. This particular analemma was built up by 46 separate Sun photographs taken during 2003 in Athens, Greece. Pictured in the foreground of this composite image are pillars called the Porch of Maidens, part of the ancient Erechtheum which was completed in 407 BC.