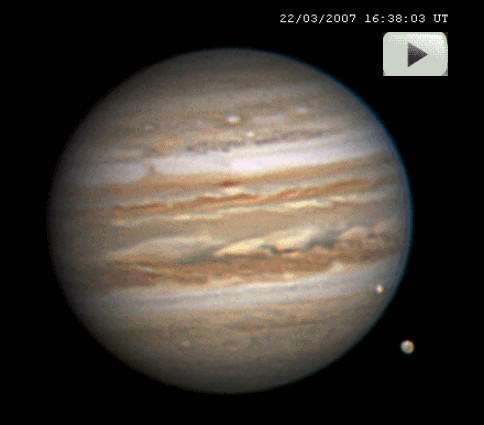 Explanation: South is toward the top in this frame from a stunning movie featuring Jupiter and moons recorded last Thursday from the Central Coast of New South Wales, Australia. In fact, three jovian moons and two red spots are ultimately seen in the full video as they glide around the solar system's ruling gas giant. In the early frame above, Ganymede, the largest moon in the solar system, is off the lower right limb of the planet, while intriguing Europa is visible against Jupiter's cloud tops, also near the lower right. Jupiter's new red spot junior is just above the broad white band in the planet's southern (upper) hemisphere. In later frames, as planet and moons rotate (right to left), red spot junior moves behind Jupiter's left edge while the Great Red Spot itself comes into view from the right. Also finally erupting into view at the right, is Jupiter's volcanic moon, Io. To download the full 2 megabyte movie as an animated gif file, click on the picture.