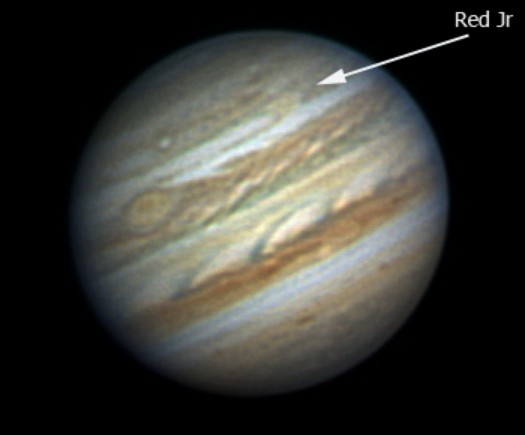 Explanation: Jupiter's Great Red Spot is a swirling storm seen for over 300 years, since the beginning of telescopic observations of the Solar System's ruling gas giant. But over the last month it has been joined by Red Spot Jr. Thought to be similar to the Great Red Spot itself, this not-so-great red spot was actually seen to form as smaller whitish oval-shaped storms merged and then developed the remarkable reddish hue. This webcam image showing the two red tinted Jovian storms was recorded on the morning of March 12 from the Central Coast of New South Wales, Australia - part of a series showing Jupiter's rotation. Similar in diameter to planet Earth, Red Spot Jr. is expected to last for a while, and trails the Great Red Spot by about an hour as the planet rotates. Astronomers still don't exactly understand why Jupiter's red spots are red.