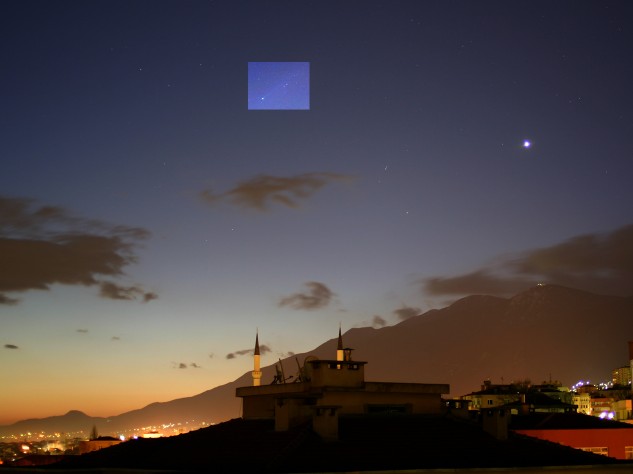 Explanation: Shining brightly in the east at dawn, Venus dominates the sky in this view over a suburban landscape from Bursa, Turkey. An otherwise familiar scene for astronomer Tunc Tezel, his composite picture of the morning sky recorded on March 2nd also includes a surprise visitor to the inner solar system, Comet Pojmanski. Cataloged as C/2006 A1, the comet was discovered on January 2nd by Grzegorz Pojmanski of Warsaw University Astronomical Observatory in Poland. At the time very faint and tracking through southern skies, the comet has now moved north and grown just bright enough to be a good target for early-rising skygazers with binoculars. Enhanced and framed in this picture, the comet's tail has also grown to a length of several degrees. The comet will be at its closest approach to planet Earth, just over 100 million kilometers away, on March 5. For northern hemisphere observers in the next few days, the beginning of morning twilight really will be the best time to spot Comet Pojmanski.