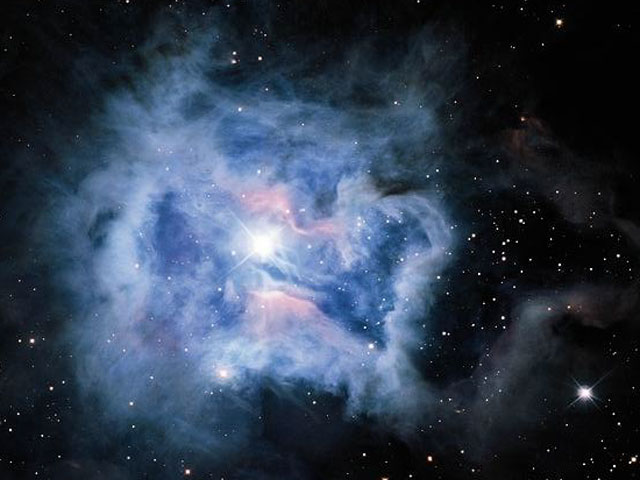 Explanation: Like delicate cosmic petals, these clouds of interstellar dust and gas have blossomed 1,300 light-years away in the fertile star fields of the constellation Cepheus. Sometimes called the Iris Nebula and dutifully cataloged as NGC 7023, this is not the only nebula in the sky to evoke the imagery of flowers. Still, this beautiful digital image shows off the Iris Nebula's range of colors and symmetries in impressive detail. Within the Iris, dusty nebular material surrounds a massive, hot, young star in its formative years. Central filaments of cosmic dust glow with a reddish photoluminescence as some dust grains effectively convert the star's invisible ultraviolet radiation to visible red light. Yet the dominant color of the nebula is blue, characteristic of dust grains reflecting starlight. Dark, obscuring clouds of dust and cold molecular gas are also present and can lead the eye to see other convoluted and fantastic shapes. Infrared observations indicate that this nebula may contain complex carbon molecules known as PAHs. As shown here, the Iris Nebula is about 6 light-years across.