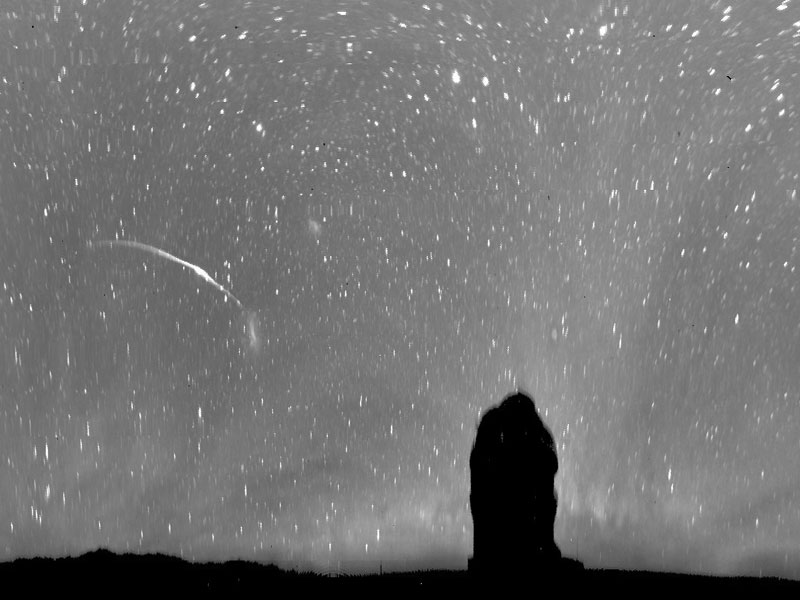 Explanation: Have you ever seen a very bright meteor? Unexpected, this year's Taurid meteor shower resulted in numerous reports of very bright fireballs during the nights surrounding Halloween. Pictured above, a fireball that momentarily rivaled the brightness of the full Moon was caught over Cerro Pachon, Chile by a continuous sky monitor on November 1. Several bright Taurid fireballs are identifiable on the sky movie for that night. The above image is a digitally rectangled version of a circular fisheye frame and shows the entire sky, horizon to horizon. The bright meteor was seen swooping between the directions of the Large and Small Magellanic Clouds. The band of the Milky Way Galaxy crosses the horizon behind the dome of the 8-meter Gemini South Telescope. Taurid meteor fireballs are likely pebble sized debris left by Comet Encke. Over the next week the Leonids meteor shower will peak, although they will need to be seen through the glare of a nearly full Moon. [Disclosure: Robert Nemiroff collaborates on both the Astronomy Picture of the Day and the Night Sky Live projects.]