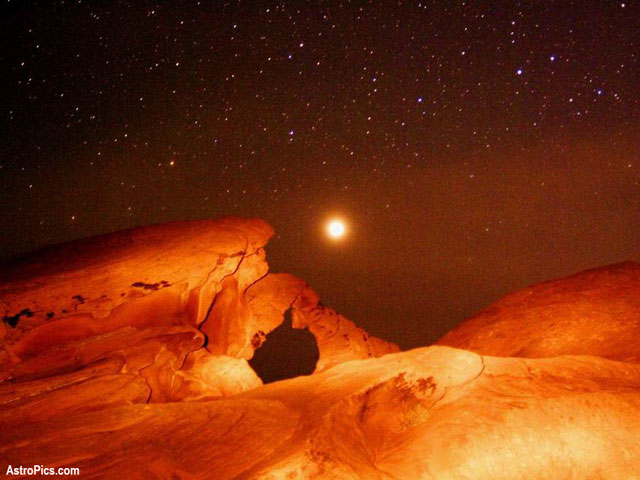 Explanation: Will Mars appear extremely close and bright later this month? No. Regardless of numerous urban legends circulating, Mars will appear relatively normal in August. October is the best month to see Mars this year. The red planet is now visible in the morning before sunrise. As Earth catches up to Mars in their respective orbits around the Sun, Mars will keep rising earlier in the night. On 2005 October 30, Earth will have caught up to Mars and the planets will be the nearest to each other in their orbits -- this time around. On October 30, Mars will be nearly opposite to the Sun, rise at sunset, set at sunrise, and appear highest and brightest around midnight. Also on October 30, Mars will appear brighter than it has in the past two years, although still over 10,000 times smaller and fainter than the full Moon. Earth will then pass Mars, and Mars will appear to fade. Pictured above, Mars is shown as it appeared 2003 August 27, when it appeared slightly brighter than it had in nearly 60,000 years. The foreground setting is in the Valley of Fire state park in Nevada, USA. The ellipticity of orbits primarily determines the closeness and brightness of Mars during opposition.