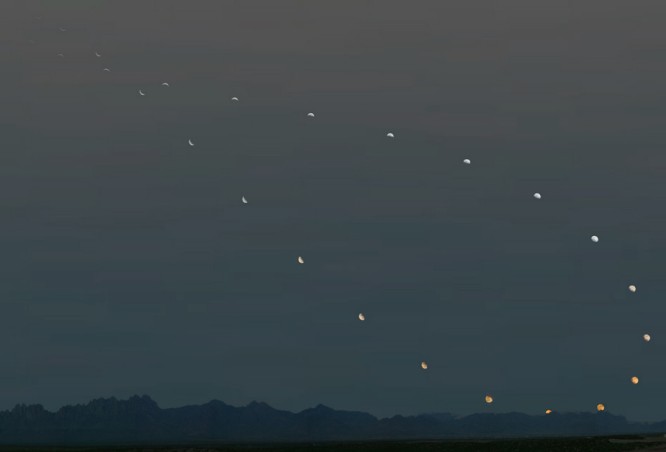 Explanation: An analemma is that figure-8 curve you get when you mark the position of the Sun at the same time each day for one year. But the trick to imaging an analemma of the Moon is to understand that on average the Moon returns to the same position in the sky about 51 minutes later each day. So, if you photograph the Moon 51 minutes later on successive days, over one lunation or lunar month it will trace out an analemma-like curve as the actual position of the Moon wanders compared to the average -- due to the Moon's tilted and elliptical orbit. For this excellent demonstration of the lunar analemma, astronomer Rich Richins chose the lunar month containing this year's northern hemisphere summer solstice. The southernmost Full Moon rises at the lower right above the Organ Mountains in southern New Mexico, USA, with the New Moon phase at the upper left. The multiple exposure image required some digital manipulation, particularly to include thin crescent phases in daytime skies.