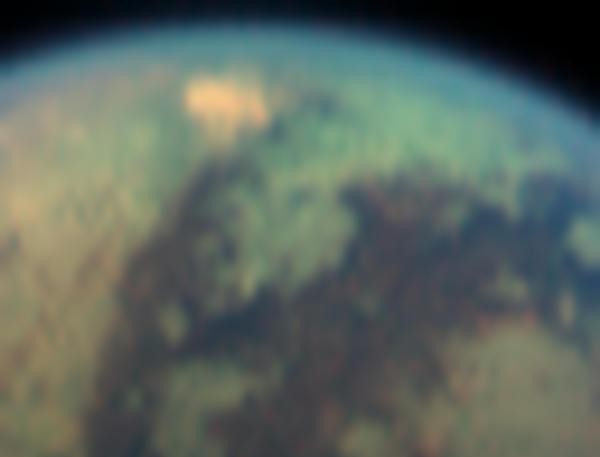 Explanation: Titan's odd spot could be a cloud, but if so, it's a persistent one. Peering into the thick, hazy atmosphere of Saturn's largest moon, cameras on board the Cassini spacecraft found a bright spot at the same location during Titan encounters in 2005 and 2004. Seen near Titan's upper edge in this false-color image from the VIMS instrument, the spot is almost 500 kilometers wide, and is brightest at infrared wavelengths. In addition to suggesting the uniquely colored spot is a persistent cloud possibly controlled by surface features, researchers also entertain the idea that the spot is caused by unusual surface material or extremely tall mountains. They also note the bright infrared spot could be hot. Further clues to the odd spot's nature will come during a planned encounter in July 2006 when Cassini's cameras will look at the spot during Titan's night. If it glows at night, it's hot.